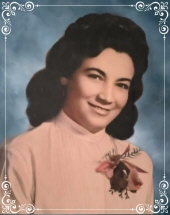 Angelina Resto- (Maiden Name Angelina Morales Gonzales), age 86, of Bridgeport has passed into the Glorious presence of the Lord on October 10, 2018 in her home while surrounded by her loving family and some close friends; Angelina was born in the Cedro, in Comerio, Puerto Rico; She is the daughter of the late Dolores Morales and the late Isidra Gonzales; at the age of 6 her parents had moved from Cedro in Comerio to the area of the Sonadora in Aguas Buenas, Puerto Rico; at the age of 9 she met a young boy by the name of Juan L. Resto who would be singing everywhere he went; As time passed Angelina and Juan fell in love and married in May 1, 1950. During the marriage Angelina became mother to three sons Juan R. Resto (Norma), Angel L. Resto (Ginny) and Oscar M. Resto (Naty); In April 1958, Angelina met the Lord at the Good Shepherd Christian Church that at the time was located at 430 Bostwick Avenue, in Bridgeport. Since then She has served the Lord; She went to Bible institute where she educated herself in Theology Studies with the Bridgeport, CT branch of the Assemblies of God Institute; At Good Sheperd Christian Church she held many positions from Secretary, Bible School Teacher, President of the Women's Ministry, Bible School secretary, Superintendent of the Children's Ministry, as well as Treasurer; Later she even reached the level of becoming a teacher for 6 years at the school she originally received her edcuation. She was also a leader of the Missionettes for 7 years, deaconess and even associate Pastor; She was on the Fairfield University Radio Station where she gladly shared and spread the Good News of the Gospel of Jesus Christ; in 1989 Angelina and Juan relocated back to Puerto Rico dedicated to Serving God in the Ministry; in 2002, they returned to Bridgeport to be closer to their family and continued serving God in her home church; She lived her final years with the faith that God would call her into his Kingdom one day and for that time, that moment, she wanted to always be ready; She is survived by three sons Juan J. Resto, Angel L. Resto and Oscar Resto; 3 daughter's in law, 9 grandchlidren and 15 great grandchildren; She touched many and none will forget her serious committment to God, husband, and family; Friends are invited to attend calling hours on Sunday, October 14, 2018 from 6 pm until the end of the service at the Good Shepherd Christian Church, 725 Hancock Avenue, Bridgeport, CT; Funeral Services will be held on Monday, October 15, 2018 beginning at 10:00 A.M. directly at the Church followed by interment in Lawncroft Cemetery, Fairfield, CT; An onlnie registerbook has been established as a place where you may share your thoughts, memoires, prayers, pictures and so much more, but is exclusively found at www.luzdepaz.com. The Funeraria Luz de Paz, 426 E. Washington Ave., Bridgeport, CT has been granted the honor to provide Angelina's final services;
To order memorial trees or send flowers to the family in memory of Angelina Resto, please visit our flower store.