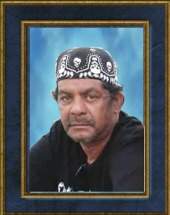 Fermin Marquez, beloved husband of Yolanda Marquez, passed away into the Glorious Presence of the Lord on June 21, 2018 in his home while he was surrounded by his loving family. Fermin is the son of Fermin Ramos and America Marquez; He was born in New York, New York but had relocated to the Bridgeport area some time ago. In addition to his wife he is survived by his daughter Jacqueline Rubiera (Fausto), Minerva Ramos (Jose Torres), Taisha Gomez (Reinaldo), and Joylise Marquez; his sistes Margarita Matos, Margie Marquez ansd Reina Ramos; his brother Juan Marquez; his grandchildren Fausto Rubiera III, Jaydalee Rubiera, Krystalise Roman, Josiah Torres, Aryana Torres, Izere Gomez and Jariah Gomez;and a host of other relatives and friends whom will dearly miss him. Friends are invited to attend calling hours on Friday, June 29, 2018 from 11 a.m. - 12 p.m. at the Funeraria Luz de Paz (where everyone is treated like family), 426 E. Washington Ave., Bridgeport. Funeral services have been scheduled for Friday, June 29, 2018 beginning at 12:00 p.m. at the Funeral home followed by interment in Park Cemetery, Bridgeport, CT. An online Registerbook has been established as a place where you may share your thoughts, memories, prayers, pictures and so much more but is found EXCLUSIVELY at www.luzdepaz.com
To order memorial trees in memory of Fermin Marquez, please visit our tree store.