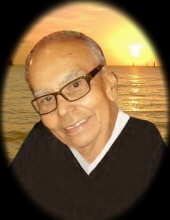 Hansel Cabañas Cortez, age 84, of has passed away into eternal rest on March 15, 2021 in Manati, Puerto Rico where he has been residing for the past years soon after the passing of his beloved the late Isabel Cabañas; He is the son of the late Pedro Cabañas and the late Elvira Cortez; He was born in Utuado, Puerto Rico, but had resided in the Bridgeport area where he had relocated many years ago. A man with a great sense of humor, Hansel enjoyed nothing more than to see his family do well. He worked very hard throughout his life making sure he provided for his family. There was nothing he would not attempt. Many considered him a Jack of all trades. If it was mechanic work, Hansel Jumped to it, painting, on it, Driving someone somewhere, on it, because ultimately his noble heart was one who would be willing to do anything if it were to bless others and all this was besides his daily employment. He loved to travel, enjoyed trying some great new restaurants and conquering a challenging level of crab legs, lobster, and more. After relocating back to Puerto Rico he met a person and she became an important part of his life; Mercedes Robles was his companion who stuck with him through thick and thin, in the good and the bad and for that, his children will be grateful for eternity, as the distance prohibited them from being next to him every minute, but she connected with Hansel from the day they met and never left his side; His most peaceful pass time was spending time in the country part of the island of Puerto Rico where it is so natural, so pure and genuine and some of the most peaceful places a person can be. Hansel has departed this earth, his memory will never pass, but the years will only create more and more motivation that the greatness of the promises of Christ will allow us all to see him once again. Until then, He rests in God's eternal peace, as he so well deserved. He is the father of Hansel Cabañas Jr. and his spouse Evelyn, Rebecca Cabañas, Olga Morales and her spouse Marlon, Mayra Cabañas Colon and her spouse Rene; his grandchildren Yahaira Marie, Jonathan, Stephanie, Sabrina, Jovanni, and Marquis ; his great grandchildren Xavier and Isabella; and a host of other relatives and friends whom will sorely miss him. Friends are invited to attend a Memorial Service which will be held on Wednesday, April 7, 2021 from 7-9 P.M. at the Funeraria Luz de Paz, (Peaceful Light Funeral Home), 426 E. Washington Avenue, Bridgeport, CT; Please sign our online Memorial Registerbook as a place where you may share your Thoughts, memories, prayers, pictures and so much more but is EXCLUSIVELY found at www.luzdepaz.com;
To order memorial trees or send flowers to the family in memory of Hansel Cabañas Cortez, please visit our flower store.