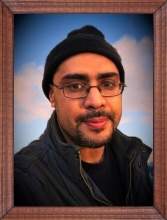 John Anthony Romero, 39, of Bridgeport, Connecticut, passed away December 6, 2019 at his home. John was born in Milford but soon after relocated to the Bridgeport area where he has resided since. John is the son of Esteban Romero (Gloria Romero) and Nelly Ortiz; A vibrant young man with a heart of gold. He made friends wherever he went. He enjoyed investing his time in the political realm for the city of Bridgeport as a way of contributing his grain towards the betterment of the city. He had a vision, like many, that Bridgeport has great potential for all people to work and live. He wanted to some day be able to say, he was part of Bridgeport’s comeback. His grain was never in vain. He worked for many years as a water operator in New York and took pride in his work. He along with his spouse Jacqueline Abrams spent time within the Democratic Town Committee in the City and although he would never seek to be in some elected position personally, he would encourage and even at times nudge his wife to play an active roll within such organizations. He was a good man who wore his heart on his sleeve as the saying goes, but if he noticed a need, he would give you his sleeve and his heart because he was genuinely loving and unbelievably forgiving. Everybody deserved a chance according to him. These are just a few of the characteristics that speak to the type of man he was, the heart he had and his disposition to each day reach new heights. In addition to his wife Jacqueline and his parents, he is also survived by his brother Michael B. Romero (Joycelyn), brother Steven Romero of Queens, N.Y., sister Lissette Romero, step-brother Steven Romero (Liseth) of Norwalk, CT, step-brother David Romero (Sasha) of Derby, CT, and one niece Maria Romero. Friends are invited to attend calling hours on Wednesday, December 11, 2019 at the Funeraria Luz de Paz, (Peaceful light Funeral Home), 426 East Washington Avenue, Bridgeport, CT; Final disposition will be held privately at the convenience of the family. Meanwhile, in lieu (instead of Flowers) Memorial donations may be made Directly HERE on his website by clicking the word HERE and you may be part of contributing towards his final expenses, Please sign his online Memorial Register book and share memories, thoughts, prayers, pictures, videos and so much more but is EXCLUSIVELY found at www.luzdepaz.com; only at www.luzdepaz.com will you confirm his family and friends will receive your well wishes, your prayers and anything else you share with them as each relationship John had was a friendship and relationship which was important to him, and his entire family. They would love to hear your story, your memory, your interaction. Thank you in advance!
To order memorial trees or send flowers to the family in memory of John Romero, please visit our flower store.