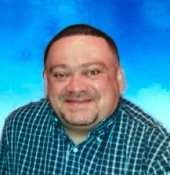 Juan Jose Maldonado Jr., Age 51, beloved son of late Nubia Ramos passed away into peaceful rest suddenly, on August 11, 2018 in his home. Juan was a lifelong Bridgeport resident who had attended Harding High School and a graduate of the 1985 Class. He focused his energy in developing skills in the computer/networking industry and followed up by by taking courses at the Norwalk Community College where he received his Associates Degree; He enjoyed what he did and was extremely gifted in his trade. He was a Good man with a gentle heart and soul. Juan's mother passed away suddenly at an early age and his uncle Hector Ramos and his wife Lucilda Ramos immediately stepped in to formally adopt and become parents of not only Juan, yet also his brother Anthony Maldonado of Bridgeport and sister Nubia Young, also of Bridgeport. He is also survived by his sisters: Stephanie Ramos-Groomes, Yesenia Ramos and Esther Ramos. In addition to his parents and siblings Juan is survived by his newphew Michael Young and Niece Elizabeth Maldonado, both of Bridgeport; Friends are invited to attend calling hours for Juan which will be held on Wednesday, August 15, 2018, from 5-8 P.M. at the Funeraria Luz de Paz, (Families First at Luz de Paz), 426 E. Washington Ave., Bridgeport; Funeral services have been scheduled for Thursday, August 16, 2018 beginning at 10:00 A.M. at the funeral Home followed by interment in St. Michael's Cemetery, Stratfrord, CT. Please sign on to www.luzdepaz.com where an online guestbook has been established as a place where you may share your thoughts, memories, prayers, pictures and so much more.
To order memorial trees or send flowers to the family in memory of Juan Jose Cheo Maldonado, Jr., please visit our flower store.