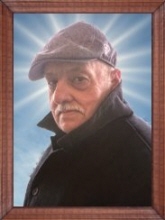 Juan Romero, "Juanin", age 77, the beloved of the late Juan Romero and the late Rosalina Romero has passed into the peaceful yet Glorious presence of the Lord on March 22, 2019, in St. Vincent's Medical Center, Bridgeport, CT while surrounded by his loving family. Juanin as many graciously called him was born in San Jeronimo Holguin, Cuba but had relocated to Bridgeport, CT in 1957 and has resided locally since. When he came to this country although time had passed, his desire to be in his homeland never diminished, yet like many who have migrated here seeking a better life, the silent yet strong calling from home never ceased regardless of the years. In the United States he met the love of his life, the late Consuelo Romero whom he loved since the day he met. Although time had passed you could see the sparkle in his eyes, and the fluttering of his heart every single time he saw her, and that same love showed as he stood right next to her till her last breath on this earth, by her side, holding her hand. For many years he was employed in Handy Harman in Fairfield but an unfortunate incident required him to stop working there so he focused his energies on his God Given Gift which was his voice, one that resonated in many venues locally as he sang as a lead singer with the Conjunto Pa' Lante and the Group Los Inolvidables. Juanin was a graceful Man and when younger had some shortcomings, but had decided to join AA which he became a very active member of and turned the page of the chapter and for the past 34 years had continued going to meetings and allowing others to see the wonderful things that can happen when a man decides to move away from that which had created so many dark moments and now was demonstrating the Gentle, wonderful caring and genuine soul that had been covered by such condition. He supported many, he encouraged countless, but as gentle and graceful as he was, he had the ability to make you feel you were the most important thing in his life at the moment. He had nothing but love for everyone, regardless of who you were, where you came from, what you had done, where you were going, one thing he did know and never hesitated to help many accomplish what he also did, which was to turn that page of a bad chapter in the book of our lives. Yes, he was a prime example of hope and that without a doubt, the best was yet to come when you decide to take the steps. For many years he was an active member of St. Lukes, St. Paul's Episcopal church until his health had declined not allowing him to be as active in the parish. He was also a very active person in the Bridgeport political realm holding various positions and a member of the Democratic Town Committee for quite some time. For those that knew Juan, His height was great, but his love for his fellow man was greater. His arms were always open to support you, his ears always willing to listen and his heart always wanting to give what money could never buy...... Truly a gem of a man and although age and ailments tried to dim his sparkle, today we know his Spirit shines more than ever before as he is in God's Presence and his soul can truly rest in Peace until the Great Calling of the Lord where his name will be called into Eternal Life. Juan Leaves to cherish his memory one son Juan "Pete" Romero and his wife Robin of Shelton, CT; two daughters Nancy Garcia of Stratford and Consuelo "Dulce" Ruiz and her husband Jesus of Bridgeport; one sister Nancy C. Romero Ochoa currently in Cuba; seven grandchildren and six great-grandchildren and a host of other relatives whom will dearly miss him. In addition to those predeceased mentioned in the first paragraph of his Obituary he was also predeceased by his daughters the Late Roselia "Cuca" Hernandez, the Late Ana C."Chela" Romero and the late Mercedes Romero; Friends are invited to attend calling hours on Sunday, March 24, 2019, at the Funeraria Luz de Paz, 426 East Washington Ave. Bridgeport, CT from 4-6 P.M. Interment will take place on Tuesday, March 26, 2019, at 1:00 P.M. directly at the St. Michael's Cemetery, Stratford, CT; An online Register book and his memorial webpage has been created as a place where you may share your thoughts, memories, prayers, pictures and so much more but is EXCLUSIVELY found at www.luzdepaz.com; TO VIEW THE SERVICES LIVE/PARA VER SERVICIOS EN VIVO Please click the link below OR download Zoom cloud meetings and put in the meeting number when clicking join a meeting of 2033308081. You may view on any desktop, ios or android devices. Por favor oprima abajo donde esta indicado o baje la aplicacion "Zoom Cloud Meetings" a su telefono o tableta y oprima "join meeting" y entre 2033308081 como numero de reunion. Aplicacion disponible en IOS o Android pero puede ser vista por cualquier computador de escritorio tambien oprimiendo abajo donde esta indicado. CLICK HERE TO VIEW LIVE/OPRIMA AQUI PARA VER EN VIVO
To order memorial trees or send flowers to the family in memory of Juan Romero, please visit our flower store.