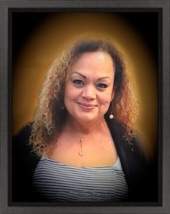 Juanita Rivera, age 54, the beloved daughter of the late Luis Troncoso and Iris Troncoso of Bridgeport has passed away into the peaceful and Glorious presence of the Lord on Wednesday, November 13, 2019 in Bridgeport Hospital, Bridgeport, CT while surrounded by her loving family. Juanita was born in Cataño Puerto Rico but had relocated to the Bridgeport area at an early age. A vibrant woman full of life with a contagious love for life, her family and yet enough love for everyone around her. She had a spirit of giving, yet never wanted nor asked for anything in return. Her doors were always open and she could never see anyone whether they were family or not with a need because it then became her need until it was resolved. her passion was to have her family around her as much as she can especially her grandchildren which were the light of her eyes. oh what she wouldn't do for those children, the sky was the limit; she looked forward to moments where her family would be spending time together and if it meant waking up early in the morning to put the meat in the oven, then its what it meant because the good times were gonna roll. As independent as she was, she was committed to her employers from the first day she began with them. She made sure every time she had the opportunity that things were done, they would be done right and it saved many people many headaches when times would get rough. Most recently Colonial Toyota, GMC of Milford, Toyota of Westport and others had been blessed to have had her work with them as a DMV clerk for those purchasing new vehicles at these car dealers. She will be sadly and forever missed by her family and friends, may she rest in peace! In addition to her mother, Juanita is survived by her husband Bryant R. Rivera of Bridgeport; her daughters, Nereida Martinez and Juleyka Santos; her son Bryant J. Rivera, Jr.; her brother Luis DeLeon; her sister Lillian DeLeon; Her Grandchildren, Nariyah Wright, Nala Wright, and Jermiah M. Santos; and a host of other relatives and friends who, again, will sorely miss her; Friends are invited to attend calling hours on Monday, November 18, 2019 from 5:30 P.M. until 8:00 P.M. at the Funeraria Luz de Paz, (Peaceful Light Funeral Home), 426 E. Washington Avenue, Bridgeport, CT 06608; Final disposition will be held privately at the convenience of the family; Meanwhile please sign our online register book where you share your thoughts, memories, prayers, pictures and so much more but is exclusively created and found at www.luzdepaz.com Funeraria Luz de Paz, where everyone is treated like family is treated. We are honored to have been chosen and as we always say............................ it all starts with you! Thank you!
To order memorial trees or send flowers to the family in memory of Juanita Rivera, please visit our flower store.