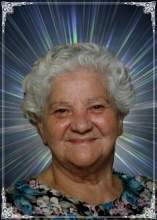 Laura "Yaya" Laracuente, age 105, of Bridgeport, returned to the Loving Arms of the Lord peacefully on October 2, 2018 in her home.. She was the beloved wife of the late Pascual Laracuente. Laura was born in Utuado, Puerto Rico on October 23, 1912, but had relocated to Bridgeport many years ago at an early age; She is the daughter of the late Lornelio Perez Soto and the late Marcolina Busach Rodriguez. She is the loving mother of Raymond, Arnaldo, Pasqual Jr., Olando, Carlos, Victor, Alicia, Esther, Julia and Blanca Laracuente; the caring grandmother of 35 grandchildren, 68 great grandchildren and 36 great great grandchildren. Laura is also survived by many family members and friends that will miss her dearly. In addition to her parents, Laura was predeceased by her sons the late Israel "Nelson" Laracuente, the late Samuel Laracuente, the late Hector Laracuente, and the late Abraham Laracuente. Friends and family are invited to attend calling hours on Tuesday, October 9, 2018 from 5 to 8 p.m. at the Funeraria Luz de Paz, (Families First @ Luz de Paz), 426 E. Washington Ave., Bridgeport, CT 06608. Services are scheduled for Wednesday, October 10, 2018 starting at the Funeral Home at 10 a.m. followed by a Mass of Christian Burial at 11 a.m. in St. Mary Church, 25 Sherman Street, Bridgeport, CT 06608. Laura's interment will take place in St. Michael's Cemetery, 2205 Stratford Ave, Stratford, CT 06615. Please take a moment to explore her online Memorial Page, where you may share your memories, prayers, pictures, videos and so much more but is found EXCLUSIVELY at www.luzdepaz.com;
To order memorial trees or send flowers to the family in memory of Laura Yaya Laracuente, please visit our flower store.