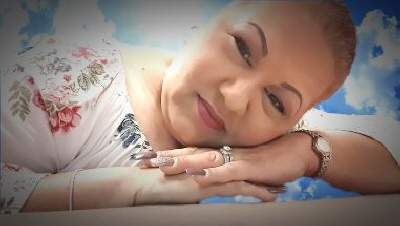 Magdalys Melendez DelaRosa, age 49, the beloved wife of Alberto de la Rosa, has returned home to the heavens above, and such transition took place on July 7, 2020 surrounded by the love of her family. Magdalys, was born in Vega Baja, Puerto Rico but had relocated to the United States mainland at an early age, relocating several times but eventually settled once and for all in The Bridgeport area. She was a power woman who would stop at nothing to help her fellow man. Magdalys loved spending time with her family however she could but as they went anywhere, the sign of a tag sale was too much to bear, too much not to stop, so they would. Her family would always stand amazed at how resourceful she was whenever someone approached her that there was a family that needed some essential piece of furniture due to just moving here or any other reason, but yet Magdalys would somehow make it happen. The family reunions considered of non- stop working and planning, implementing, cooking and overall taking on the majority of the load because all she wanted was everything to be as perfect as it should and always be with those she loved so much. She never would never mind doing, and working because it was for the best reason on earth. Her family! One day, she even obtained a trailer with only one mission in mind, to give, pick things up and be able to transport them to the persons who needed them. Her favor, was not something she did, but something she clearly showed that it was something she received from her father above and used that grace to bless others every day! Whatever she would find and was able to get was mainly for whoever she would find out needed something. Never giving anyone, the least, or worse or anything less than she would accept for herself or her own family. If you saw here doing anything you could hear her singing her "Church music:" as she praised the Lord in every breath she took and reflected the Love of God in everything she did. There was nothing she would not try to accomplish. Whatever the challenge, she was up to it!. Her favorite pass time was doing nails, a talent she not only enjoyed but mastered the art of doing it. Her cooking was flawless and her family would look forward to her signature dish of Steak, but made with the latin flair only she knew how to make. Truly a shining gem, a shining star on earth and today, once again, shining bright as she always did, but now brighter than ever in the skies above. She is the beloved daughter of Hector Melendez Salgado and Magdalena Rodriguez Rosario; She is also survived by her sons Giovanni Milan and Juan deLa Rosa; her siblings Carmen Rivera,and Moises Melendez Rodriguez; and a host of other relatives and friends whom will sorely miss her. Friends are invited to attending a viewing which will be held on Sunday, July 12, 2020 from 4-6 P.M. Church of God, 48 Crescent Place Bridgeport, CT 06608. Funeral Services will be held on Monday, July 13, 2020 beginning at 10:00 A.M. at the Church of God, 48 Crescent Place Bridgeport, CT 06608 followed by interment in the Mt. Grove Cemetery, Bridgeport, CT.
To order memorial trees or send flowers to the family in memory of Magdalys Melendez DeLaRosa, please visit our flower store.

Church of God of Prophecy

Church of God of Prophecy