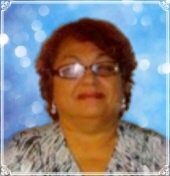 Maria Martinez, age 68 of Bridgeport, returned to the Loving Arms of the Lord suddenly on June 11, 2019, at her residence. She was born in Arecibo; daughter of the late Nicomede Rodriguez and Etevania Lugo prior to relocating to the Bridgeport area many years ago. Maria is the loving Mother of Anthony Lugo, Rosa Maria Molina, Milagros Torres; the grandmother of Samuel Padro, III., Melissa Torrs, Natasha Torres, Veronica Torres, Angel Lugo, Alejandra Martinez, Stephanie Lugo; the great-grandmother of Samuel Padro IV., Adam Torres, Gabriel Padro, Arianna Ramos, Manuel Padro, Alexander Padro, Jayla Fenicien, and Kenya Soto; and the caring sister of Ana Fernandez, Genoveva Acevedo, Efrain Martinez, Maria Rodriguez, and Manuel Jesus Cuevas. and a host of other relatives and friends whom will dearly miss her; She was predeceased by her son the late Jose Alvarez; Friends and family are invited to attend calling hours on Thursday, June 13, 2019, from 5 to 8 p.m. at the Funeraria Luz de Paz (Peaceful Light Funeral Home), 426 E. Washington Ave. Bridgeport, CT 06608. Funeral Services are scheduled for Friday, beginning at 10 a.m. at the Funeral Home followed by her interment at Lakeview Cemetery, 885 Boston Ave, Bridgeport, CT 06610. Please explore her online Memorial Page where you may share your memories, prayers and so much more found EXCLUSIVELY at www.luzdepaz.com.
To order memorial trees or send flowers to the family in memory of Maria Martinez, please visit our flower store.