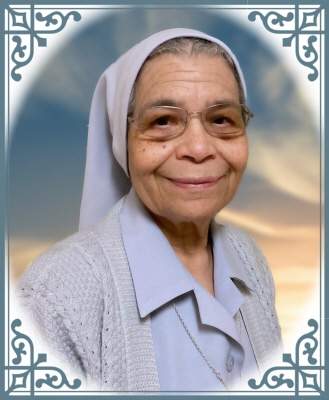 Madre Maria Luisa Quiles, age 80, currently of Bridgeport, CT has passed away into the Glorious Peaceful rest of the Lord on Wednesday, May 19, 2021, in St. Vincent's Medical Center, Bridgeport, CT. Sister Maria Luisa as many Graciously knew her, was born in Ponce, Puerto Rico to the late Santiago Quiles Albino and the lat Basilia Castellan but relocated to the United States many years ago. She committed her life to the service of the Lord at the early age of 18, she did her Noviciado in Madrid España, and to do so she had taken a ship across the Atlantic Ocean for a week to get there. Maria focused her energy first and foremost into serving God and His children, but did so with her entire existence and every bit of energy within her. Sister Maria Luisa was a joyful person, always full of life and yet one of the most humblest persons you could ever encounter; her contagious smile and personality brought energy into any place she arrived. Every year she would begin 2 months prior to her birthday to make sure everyone knew it was coming up. She would work with the children to bake her own birthday cake and loved every second of it. She was committed to her calling every step of the way. She was a very detail oriented individual who truly enjoyed the simple things in life, yet wanted so much for everyone around her. She had been serving most recently at the Mary Immaculate Daycare where she taught the pre-school children and played games. Watching her as she spent time with them and taught them you could observe the sparkle within her and her sparkle would grow every single day as she saw them flourish before her eyes. Her devotion to Virgin Mary was something exemplary which many admired. Although she resided in the United States her family, wherever they were, knew the love she had for them and she would always make it a point not only to call and conversate regularly but whenever possible go, visit and made sure she never arrived empty handed. Everyone knew that when sister Maria Luisa was going to see her family it was never less than multiple pieces of luggage she would carefully pack to make sure she brought something with her to give to everyone back home she was going to see. A Giving woman none the less and one that never sought anything in return but without a doubt the seed of love was something she planted in each hart and mind everywhere she went. Those things were a great component of who she was, a simple woman but one concerned with the well being of everyone around her and even those she did not see daily yet made sure she kept them in her mind, prayers and her suitcase (S)when she would go see them. Throughout her ministry, Sister Maria Luisa had gone to Newark, New Jersey, Plainfield, MA, Roxbury, MA, Brentwood, California and most recently Bridgeport, CT, but she had a special affection and love for the City of Newark, New Jersey, a place she spoke fondly about very frequently; She stopped at nothing to serve others and made sure one of her touches consisted of some delicious baked goods. there is so much to be said about this gracious woman committed to the work of the Lord and words could never express enough who she was, but one thing is for sure, this world has lost a beautiful woman, with a heart of a priceless value. The seeds of love she planted in so many throughout her life, will flourish for years to come. She will be sadly missed by all! Sister Maria Luisa leaves a Large amount of persons to cherish her memory and we share the those names of family members and even some which became her family throughout the year. Her siblings, Aurelia Quiles, Sonia Quiles, Antonio Quiles, Maria Quiles, Adela Quiles, Basilia Quiles, Pedro Quiles , Benito Quiles and Ana Quiles, & Daisy Quiles and a host of nieces, nephews whom will all sadly miss her. In addition to those in her family, Her sisters in The Convent were her family also and the ones she shared so much time and experiences with.\She made sure they knew and would constantly demonstrate the love she had for each one of them. Without a doubt she was a great sister, friend and more; Friends are invited to Formal viewing of Sister Maria Luisa at the St. Peter's Roman Catholic Church 695 Colorado Avenue, Bridgeport, CT on Sunday, May 23, 2021 from 4-8 P.M.; a Mass of Christian Burial will take place on Monday, May 24, 2021 directly at the St. Peter's Parish, 695 Colorado Avenue, Bridgeport, CT; Final disposition will take place in St. Michael's Cemetery Stratford, CT. An online memorial register book has been created as a base where you can share your thoughts, memories, prayers and so much more it is exclusively found at www.luzdepaz.com
To order memorial trees in memory of Maria L Quiles, please visit our tree store.

Viewing of Sister Maria Luisa will be held all at the Parish.

Mass will begin promptly at 11:00 A.M. and everyone will be meeting directly at the church!