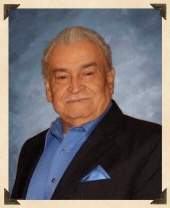 Orlando M. Barrios Sr., age 79, entered into Eternal Rest on Thursday, December 19, 2019, at Bridgeport Hospital. He was born in Vega Baja, Puerto Rico to the late Antonio Barrios and the late Herminia Mercado. Orlando was a talented artist who painted many beautiful paintings. He also used his creative talents restoring antique cars. Orlando was the beloved husband of Ermelinda Barrios, loving father of Maritza Barrios and Orlando Barrios Jr., and his wife Raquel, the adoring grandfather of Anthony Barrios, Giovane Santana Dolci Santana, Geanna Marroquin and her husband Antonio, Melissa Summerville and her husband Kyle and five great-grandchildren. He is the brother of Lydia Barrios and Yayo Barrios. He was preceded in death by his grandchild, Dominic Santana. Friends and family are invited to attend Calling Hours on Thursday, December 26 from 5 - 8 PM at Funeraria Luz de Paz 426 E. Washington Ave. Bridgeport, CT 06608. A Mass of Christian Burial will be held on Friday, December 27 at 11:00 AM at St. Mary's Roman Catholic Church. Interment will follow at Lakeview Cemetery, Bridgeport, CT. Please consider making a donation directly to Orlando's funeral services by visiting: https://luzdepaz.com/Forms/Funeral-Funding-Donations-to-Assist-Families/5/index.html#form-start. Orlando's memorial page was specifically designed so you may see service information and share memories, prayers, photos and so much more, found only at www.luzdepaz.com.
To order memorial trees or send flowers to the family in memory of Orlando Barrios, please visit our flower store.