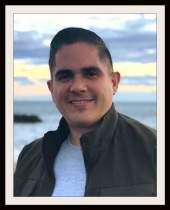 Orlando Fonseca, age 43, of Bridgeport, Connecticut, passed away peacefully on December 31, 2019, at Norwalk Hospital. Orlando was raised in Bridgeport and remained a lifelong Connecticut resident. Orlando is survived by his beloved wife Yaira Zoe Nuñez, and only son, Ethan Orlando Fonseca Nuñez; his parents Mr. & Mrs. Rafael and Iris M. Fonseca, of Bridgeport; grandmother Rosa Rivera; his loving sister Sandra Fonseca of Bridgeport; brother Sergeant Rafael Fonseca Jr. of the Norwalk Police Department and wife Dolores Fonseca of Milford; his loving niece Melanie Fonseca and nephew Christopher J. Fonseca; and a host of other family and friends whom will sorely miss him. Orlando graduated in 1994 from St. Joseph's High School. He attained a Bachelor’s of Science in Psychology from Sacred Heart University and a Bachelors in Finance from Fairfield University. Orlando was described as a joyful, unique, non-stop joker, and lighthearted young man. Orlando was a man of many admirable accomplishments, the greatest of which were his marriage to his beloved wife Yaira Z. Nuñez in 2011, and the birth of his son Ethan O. Fonseca Nuñez in 2019. The greatest gift that Orlando leaves is the unending love and admiration he had for his infant son. In addition, he leaves his son Ethan and others a legacy of commitment to others, growth, love, and faithfulness. Orlando had a calm and peaceful demeanor, and an uncanny ability to avoid stressing over the petty stuff which was out of his control. He remained optimistic throughout every one of life's obstacles. This ability does not come easily to most, but is a practice many of us should consider adopting. Whether it was through his meaningful morning texts, through phone calls, or get-togethers, Orlando always managed to keep in touch with everyone in the most meaningful and genuine way. Orlando and his wife shared a passion for traveling and learning about other cultures. They appreciated the uniqueness of over 30 countries visited throughout the world. He loved to visit art museums, local art exhibits, and appreciated the wonderful work of many artists. Orlando had a love for community as he and his wife were committed to addressing basic human needs. As such, they were involved in the charitable works for Charity:Water, an organization that provides clean drinking water for people in developing nations. In lieu of wedding gifts, they opted for contributions and managed to construct a well for an entire village. Their marriage was the beginning for two lives to live as one, but also the beginning of a new life of change for an entire village. Orlando was also an avid gardener of Dahlias, which he proudly loved to share with others. His love for the birds that would come to his yard was evident as he provided a bird feeder stocked with plenty of bird food. There was nothing that he would not share with others. Orlando dedicated himself as a coach and leader alongside his brother to the children of Park City Little League. Despite not having children at the league, he coached where he played as it was meaningful to him. For many years he found joy in providing a safe and productive atmosphere in which the children could thrive. He encouraged them to continue their education because he believed education was the key to everything. Orlando had a gift with the kids; he created a bond that would encourage them to reach new heights, try new things, and to never give up as life would get difficult, as his famous words stated, "everything will be ok.” Orlando also volunteered his time as a planning committee member with Maker Faire Westport for five years. The biblical scriptures ask that we be “the salt of this earth” and without question, Orlando led his life this way. His 43 years on earth were intense, productive, significant, and guaranteed that Orlando will never be forgotten. His years were never wasted away, and he will always be remembered as one who contributed his grain of salt to make this world a better place. He will be alive and remembered for years and years to come by all who knew him. May he rest in God's everlasting peace, until the day we all meet again. Family and Friends are invited to attend calling hours on Monday, January 6, 2020, from 5:30 P.M. until 8:00 P.M. at the Funeraria Luz de Paz, (Peaceful Light Funeral Home) 426 E.Washington Avenue, Bridgeport, CT. 06608. A Mass of Christian Burial will take place on Tuesday, January 7, 2020, at 11:00 A.M. at the Saint Charles Borromeo Catholic Church, 391 Ogden Street Bridgeport, CT. 06608. Final disposition will take place at the Mountain Grove Cemetery, Bridgeport, CT. In Lieu of Flowers please make a donation to either Ethan's college fund at https://www.aboutchet.com/egift/ using code: CTXefmB; or Charity:Water at https://bit.ly/2MR86u9 .
To order memorial trees or send flowers to the family in memory of Orlando Fonseca, please visit our flower store.