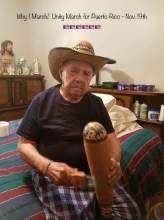 Rafael Cintron, age 94, beloved husband of the late Benedicta Cintron, passed away into the Glorious rest of the Lord on July 6, 2018 in St. Vincent's Medical Center, while surrounded by his family. Rafael was a loving man who enjoyed his time listening to music which reflected the love and appreciation for his hometown of Bayamon, Puerto Rico and the entire island for that matter; he was a clear example of those that believe that although we move away from our homeland, our hearts remain active and reflective of our heritage and customs. Truly a priceless gem. He resided in Bridgeport the majority of his life with his wife and together they became parents to his loving daughters Maria E. Cintron and Raquel J. Figueroa Heath; In addition to his daughters Rafael is survived by five grandchildren, one great grandchild; his brother Antonio L. Cintron and a host of other relatives and friends whom will dearly miss him. He was predeceased by his siblings, the late Agrispina Cintron, the late Polonia Cintron, the late Luz M. Cintron and the late Victor Cintron; Friends are invited to attend calling hours which which are to be held on Wednesday, July 18, 2018 from 6-9 P.M. at the Funeraria Luz de Paz (Peaceful Light Funeral Home, where everyone is treated like family), 426 E. Washington Ave., Bridgeport, CT; Funeral services have been scheduled for Thursday, July 19, 2018 beginning at 10:00 A.M. at the funeral home followed by a a Mass of Christian Burial in Blessed Sacrament Church , 275 Union Avenue, Bridgeport, CT; Interment will follow in Lakeview Cemetery, Bridgpeort, CT; Please sign our online Registerbook as the place that has been established where you can share your thoughts, memories, prayers, pictures and so much more, but is found EXCLUSIVELY at www.luzdepaz.com
To order memorial trees in memory of Rafael Cintron, please visit our tree store.