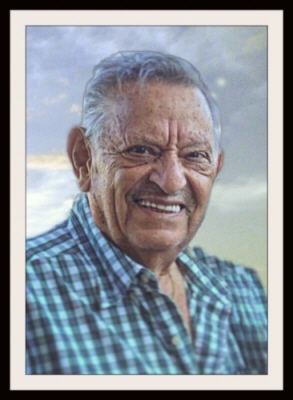 Reinaldo(Rey) Fuentes, of Bridgeport passed away peacefully on Monday, June 7, 2021 surrounded by his family. He is survived by his beloved wife, Paula Fuentes of 65 years. Rey was born in Cidra, Puerto Rico on February 3, 1933. He came to the United States at the early age of sixteen and started working at Cornwall and Patterson, and then moved to General Electric for the next 25 years as a machine operator. He later became a businessman by operating his own grocery stores, Fuentes Grocery and La Bodega del Pueblo. He was called by many the Lawnmower man or Mister Fix-It because he could fix nearly anything that was given to him and he was always willing to lend a helping hand. He was a lifelong NY Mets fan and loved telling great stories of his youth. Rey was a man of great faith and an active parishioner of St. Mary Church in Bridgeport for over 40 years. Rey was a loving, generous and thoughtful man who loved playing dominoes, working on his garden, and going to the gym (even at 87 years old). His greatest enjoyment however was found in the time he spent with his family, friends, and many pets. He was a loving and devoted husband, father, grandfather, great grandfather, brother and uncle who will be greatly missed by all who knew and loved him. Rey is survived by his loving daughters, Miriam Fuentes and her husband Anthony Hernandez of Milford, Evelyn Alicea and her husband Nelson of Monroe; his granddaughters, Vanessa Hernandez Levin(Vadim), Cristina Alicea Saunders(Kevin), Alana Hernandez, Diana Alicea, and two great-grandchildren, Ari and Kylie; his sister, Iris Rivera (Abel) from St. Lucie, Florida, his niece Midred Diaz (Tony) and their daughter Gabriela; and all his nieces, nephews, relatives, and friends whom he loved and cherished. Calling hours will be held on Friday, June 11, 2021 from 9:30 - 11:30 am at Funeraria Luz de Paz, 426 East Washington Avenue, Bridgeport, CT. A Mass of Christian burial will be celebrated St. Mary Church at 12pm, 25 Sherman Street, Bridgeport,CT. Interment will follow immediately after at Mt. Grove Cemetery, 2675 North Avenue, Bridgeport, CT. Please be advised that everyone must properly wear a mask while inside the funeral home. Also there will be a maximum on 50 people allowed inside the funeral home at a time.
To order memorial trees or send flowers to the family in memory of Reinaldo Fuentes, please visit our flower store.