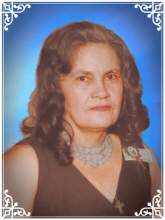 Teodora C. Rodriguez, age 89 of Bridgeport, returned to the Loving Arms of the Lord on Wednesday, January 15, 2020 at Bridgeport Hopsital, surrounded by family. She was the beloved wife of Alejandro Rodriguez. She was born in Cayey, Puerto Rico; daughter of the late Antonio Collazo and Francisca Guzman prior to relocating to Bridgeport in 1968 with her 4 children. Teodora was employed at Bryant Electric until her retirement in 1988. She was predeceased by her son Edgar Lleras of Bridgeport, CT , her brother Jose Collazo, of Cayey Puerto Rico and her sister Antonia Collazo, of Cayey, Puerto Rico. She is survived by her sons, Evangelio Franco Jr., his wife Bernice Franco, Jose H. Franco, his wife Noemi Franco, and Carlos M. Franco, his wife Vilma Vazquez. Also two special men whom she considered her sons ; Jaime Vazquez and Harry Rivera. As well as the Vazquez/Velasquez/Ortiz family whom she considered family. Her brothers and sisters, Juan Antonio Collazo, Pedro Collazo, Victor Collazo, Miguel Collazo, Suzanna Collazo and Virgin Collazo. Grandchildren Alexsa Flores, Ricardo Franco, Linsey M. Franco, Evangelio M. Franco, his wife Cynthia Franco, Luciana M. Franco, Erica D. Franco, Damaris Lopez-Franco, her husband Rafael Lopez, Carlos M. Franco Jr. , and Eric R. Franco; 13 great grandchildren, 2 great-great-grandchildren, many nieces, nephews, many Step-Children and Step-Grandchildren and many other relatives and friends who will miss her dearly. Family was the most important thing to her. She enjoyed cooking meals for anyone who stepped foot into her home. She was an avid domino player. She loved playing dominoes with family and friends, especially on Friday's at her home for the past 25 years. She also enjoyed playing Bingo. Her favorite past time was going to the casino, especially Mohegan Sun. Many family and friends today stay warm with blankets, scarves and hats that she crochet for them. She also enjoyed dining at Burger King, with her late husband. She was a loving Mother,Wife,Grandmother, Sister and Friend to many. She had a heart full of love and kindness for any person with whom she met. A special thank you to the staff at Saint Joseph's Manor in Trumbull, CT and the ER staff at Bridgeport Hospital for their wonderful care. Family and friends are invited to attend Calling Hours on Wednesday, January 22, 2020 from 5:30 - 8 p.m. at the Funeraria Luz de Paz (Peaceful Light Funeral Home) 426 E. Washington Ave. Bridgeport, Conn. 06608. A Mass of Christian Burial is to be confirmed on Thurday, January 23, 2020 beginning at 11 a.m. Her interment will follow at Mt. Grove Cemetery, Bridgeport, Conn. Please revisit Teodora's Memorial page to view updated service information, share memories, prayers and pictures found EXCLUSIVELY at www.luzdepaz.com.
To order memorial trees in memory of Teodora Rodriguez, please visit our tree store.